How your birth Ruling Planet can bring prosperity? 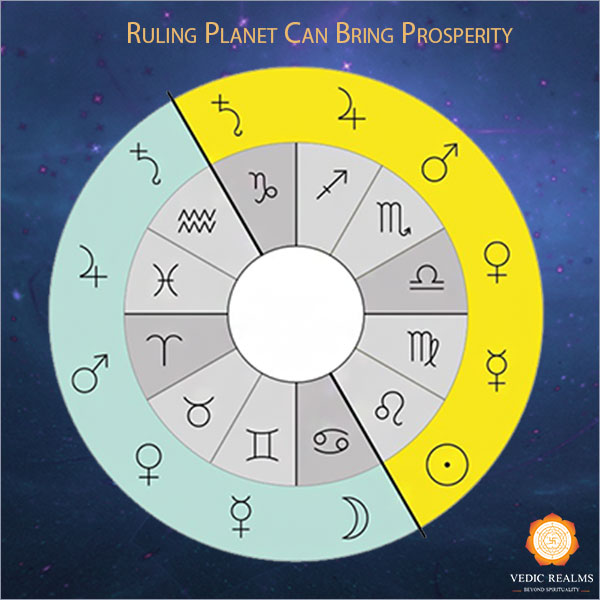 The planets and stars offer incredible insight about our personality, traits, thoughts, and actions. These are all captured in our horoscope which is prepared at the time of our birth, capturing the location, time and date. Our horoscopes can enlighten our thoughts to have better daily experiences and help us make the right choices and decisions. As per Vedic Scholars, the process of interpreting the locations and motions of the planets was possible only with great astronomical understanding from analytical data from Vedas and Upanishads.

This was possessed by handful few scholars and practitioners, who had attained the superiority of interpretation of those text. It all started in Bharat (now India), where Vedic Gurus or Scholars inculcated that knowledge through ‘Sadhana’ (Meditation) and deep research of the space, time, and world around us. Many from today’s modern world do not accept these theories even after continued acceptance and diligent reporting from authorised international agencies. Most of today’s space technology, aviation, mechanical and technological development have been based on Vedas.

There has been many recent reports of a particular technology or process by Germany, Israel, UAE based researcher been based on objectives of Vedic Science and Systems. That is when the rest to the world took notice and started to follow, and researcher have been deep diving on analysing the ‘Holy Text.’

The Vedic Scholars, Researchers, Astro Scientist have stargazed since the dawn of time. Over thousands of years, our first forms of prehistoric ancestors i.e., homo habilis tracked awesome astronomical phenomena such as eclipses, comets, and other planetary patterns. They indeed formed high amount of knowledge on constellations, celestial bodies, planets, stars and the moon. It was very instrumental through Vedas to understand the galaxy and the solar system with its components as the Moon, Mercury, Venus, Mars, Jupiter, Saturn, Neptune etc which makes notable degrees of your Birth Chart. There is one planet which control your birth chart and those traits is what defines you to the individual you become. There are instances of individual being slightly different from what they are projected as the Birth Planet. That depends on situation and formulation of other planets sitting with your ruling planet in that particular house of your horoscope.

As per the ancient studies and scripts, the zodiac is divided as per the sections of the sky in 12 sections. Each section has been named after the constellation of stars and planets as it contained. The Vedic Scholars tracked time and provided predictions through the movement of planets, called transits, corresponded with both auspicious events and misfortunes on earth. In the nodes of a horoscope there are scope and degrees of each star and planets which determines the effect of them on your life and destiny. It is through all these intersections of meticulous observation, research, study, that Vedic Astrology was born with the content of enabling avoidance of misfortune, crisis, adverse events etc. Vedas was at the heart of science, medicine, philosophy, and magic. It is thus through that medium we quantified the knowledge on enabling most of today’s innovation. Hence, the trust that the vast, mysterious macrocosm of the universe reflects the microcosm of human experiences. The discovery of the planets like Uranus, Neptune and Pluto solved the celestial puzzle and established the formulation of astrology as per the Vedas.

So, as established on the notion of each planet to be controlling respective zodiacs. The ruling planets are the bosses of the zodiac. They call the shots and influence how each sign runs its actions, and also how everyone else behaves under their influence. Every zodiac has a ruling planet, and this planet has the most significant influence on that individual. This planet influences each expression, insights, personality, traits and inherent merits and demerits.

Individual with ruling planet as Saturn loves ‘Rules.’ This ruling planet represents responsibility, hard work and determination. It is also the ‘Taskmaster’ of the planets. These individuals can find alternative routes to reaching a result or puzzle. Saturn as a ruling planet help us understand your limitations. But this ruling planet can play hard on self as for its characteristics of being judging self too much and being critical. Best aspect of this ruling plant is it helps to learn from mistakes.

This ruling planet is a breath of fresh air as this is the final air sign of the zodiac. This ruling planet helps individual to make their mark in their respective fields of work. It is because Uranus as planet has an inherent quality of innovation and consciousness. It will help you think out of the box and delve into new modes of action. The individuals tend to be open for understand beyond the horizons. It thus helps in controlling disasters. These individuals tend to drive their passion and interest with lot of energy.

Neptune is the lord of creative energy and spirituality. But they tend to not be realistic. They prefer to exist in fantasy. They will always be floating above the rest of the world or feel like they do. These individuals tend to be in their dream like state of mind but has deep level of emotion. But, they are very persuasive through their ability to empathize and turn the situation in favour.

This is the first sign of the zodiac, which also tends they are being the eldest in the family or group. Thus, making them set pace for the rest of the group or section to follow. This ruling planet drives determination, pace and go-getter attitude. This planet gives the natural drive of a warrior to individuals of this zodiac. The characteristic of this planet is about energy, passion, self-starting and undeniable confidence.

This ruling planet is all about love and beauty. It makes an individual more relevant for the attributes with their physical features. This individual has inclination towards good food, good lifestyle, art, love, and anything aesthetically pleasing. This planet helps an induvial of the zodiac to pamper each of their senses. This planet brings highest level of loyalty and commitment.

This is planet of communication. An individual in one of this air signs has immense level of intellect and courage. The planet encourages individuals to be overtalking on any situation or topic. This ruling planet encourages the mind to learn, think and share more with a winning perspective.

This ruling planet can change your feelings as quickly as the tides. This planet is responsible for the erratic flows of human emotion and can immediately change on how you are feeling about someone or a situation. Individuals tend to be very sensitive under this planet. This ruling planet drives to care deeply about your family and develop an emotion bond. This planet drives the part of safety and comfort towards others and expect the same in return.

The brightest star of the solar system you be kind, energetic, enlightening and power self as well as others. The individual will show exceptional exuberance. Sun develops the core principles of self-introspect and thus make up who you are and what is your purpose. With this ruling planet you can touch your soul to know the best of yourself and give a loud shootout.

With this zodiac and the ruling planet you are a born problem solver. Individual under this zodiac can share their skills with ease and drive value to develop or train others. Individuals here bring in relevant logic and reasoning to influence. Here, individuals have innate ability to discern a particular capability and discriminate the rightful job work for the best result. Because of their intense focus, they can organize and structure as per their imagination.

This ruling planet gifts the zodiac great diplomatic skills. They have a natural ability to balance in partnership, work, and life. It helps you to value harmony and hence makes you a great mediator. An individual in this zodiac with the ruling plane is always fair and honest to their commitment and responsibilities.

This ruling planet shadows the individual with darkness, for it being the farthest in the orbit from the Sun. It though helps to activate your subconscious which might erase all the darkness to efface. You will always crave to go beyond the understanding of mystery, intensity, death, and rebirth. The individual tends to be very low-key and conservative in their thoughts and actions.

Now, looking into the aspects of the mentioned ruling planet characteristics which has been hence proved through various reports and international journals. Thus, Vedas as the first text scripture to have the astronomical bandwidth of understanding and implementation. It is then how people started on Vedic Practices being their part of lives. Making ‘Vedic Astrology’ as a source of understanding their birth philosophy and reach desired destiny. It is through Vedic Astrology which helps you to understand your vision, process, and actions to be followed for the final desired destiny to be reached through your Birth Ruling Planet as per your horoscope. We at Vedic Realms thus enable the secrets of your life through the ancient theories of Vedic Science and Astrology.